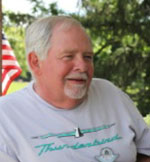 On Thursday Nov 10 we had a Tech Session at my home to work on the 1966 Thunderbird. It was attended by Phil Hack, John Horn and Harry Skruch. For five years 66 Blue Bird Convertible has had an exhaust manifold leak, right side. For the past five winters I have tried to loosen the rusted manifold bolt. Without success. I tried WD40, PB Blaster, and Heat and candle wax to break through the rust. I decided to remove the cylinder heads rather than breaking bolts that I could not drill out. During a Tech Session at Phil Hack's home when we worked on repairing the coolant leak on his Thunderbird, I talked about removing the Cylinder heads. I was encouraged to pick a day for another Tech Session.

In preparation, the day before the Session I drained coolant and disconnected the exhaust pipes. On Thursday the cylinder head removal began and in four hours the cylinder heads were off the engine. If I had to accomplish this on my own I would have been working for about four days. I am very grateful for the help. Zoeanne prepared an excellent lunch of Hot Chicken Salad for everyone.

I took the cylinder heads to Swanner's Automotive Machine Shop, 8640 Quentin Ave. in Parkville 21234. Swanner base price is $240 for cleaning the heads, grinding the valves and skim cleanup of the cylinder head face. Upon inspection, Swanner’s determined the valve stems and valve guides were worn. The valves are being replaced. The new valves have .015 larger valve stems from the original valves. The original valve guides will be reamed to accommodate the larger size and will not have to be replaced. Seven of the exhaust bolts had to be drilled out and the threads cleaned up. Final cost for the cylinder head refurbishment is $460.

Thanks for the help Phil, John and Harry.
Dan Denham

Back to Members Stories page